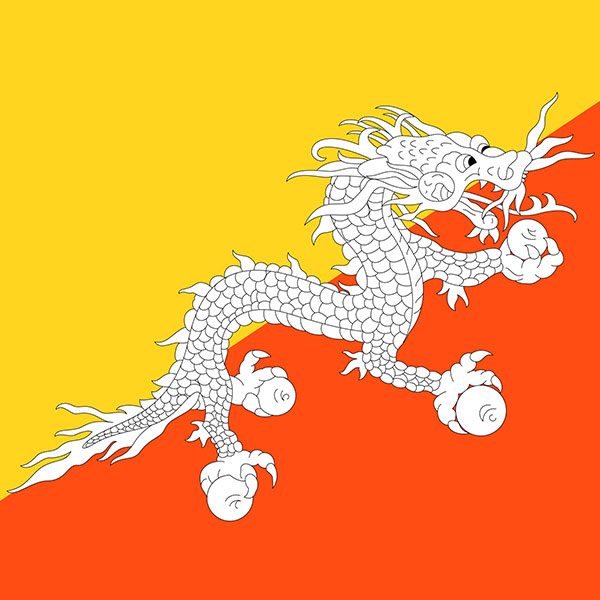 „You can’t do this!“ – that was the generally accepted statement about individual travel to Bhutan. In our capacity as travel editors, we are very stubborn and did not accept this statement.

This led to two activities. First, we needed a sufficiently equipped car and second, the permission to enter the country with it at. Both were not easy to achieve. But we succeeded. For the first time, a team from the Occident received permission to travel in a self-organised manner to Bhutan. The trip of Christoph and his Austrian friend Gert took place in November 2010. Christoph came home with 2.560 photos and started writing several articles.

Mrs. Barbara Riepl, Thailand’s former Honorary Consul for Bavaria and Saxony, is one of the best friends of Her Majesty Ashi Sangay Choden Wangchuck of Bhutan, the queen mother. The crowned head naturally required royal care whenever she decided to visit Mrs. Riepl in Europe and perform representative duties on the one hand. Mrs. Riepl, on the other hand, aimed to support and further develop Bhutan’s economy and showcase the rich cultural heritage of the country.

In 2014, Tourism Unlimited was assigned with supporting the visit of a European trip of Her Majesty the Queen Mother Ashi Sangay Choden Wangchuck of Bhutan and corresponding meetings.

Christoph assertively organised highly official meetings, lectures, exhibitions and business meetings, such as a meeting with the imperial house of the Esterhazy family in Hungary and Austria about a Bhutan retrospective in Fertöd Castle, personal talks with Luitpold Prince of Bavaria about the construction of a brewery in Bhutan, a visit of the Royal Porcelain Manufactury at Nymphenburg Castle, and meetings with the Asian management of the car manufacturer BMW in Munich about a cooperation on electric mobility.

Christoph also played a vital role in setting up a scholarship programme for medical students from Bhutan with the renowned Semmelweis university in Budapest, Hungary.

What the customer said

Mrs. Barbara Riepl: „For quite a number of cultural events, Christoph took over the rather delicate and difficult task to accompany the royals and their entourage through all appointments in Germany, Austria and Hungary, which he always solved brilliantly.

I would like to emphasise that Christoph helped to determine the cooperation with the rector Prof. Dr. Ágoston Szél of the Semmelweis University in Budapest from the ground up. He coordinated the preliminary work, the realisation and all related arrangements in an exemplary manner. Even the two exhibitions of artistic photographs of the Kingdom of Bhutan, its landscapes and inhabitants bear Christoph’s signature: the majority of the photographs were taken by himself in the Himalayan state.

Last but not least, Christoph’s sensitive approach to this unique culture and his profound knowledge of Bhutan, a country largely unknown in Europe, is an invaluable asset in all our activities. We are lucky to have them both.“